That’s what we say while we are packing it up from about almost every place we have been. There haven’t really been any places that were terrible and many stops we have added extra days. Or longer, like Astoria. It’s nice to be able to do that, even if sometimes short notice doesn’t fit with friends’ plans. We have missed a few people because of that but we will make sure not to next time.

We had planned to drop down from Colorado to New Mexico and over to Texas, but if we could, we wanted to get in some time with Dos Okies, longtime friends we met in Mexico. We traveled back and forth between Oklahoma and Kansas visiting until we took off in the bus. They came down to Texas last winter and we had a great visit. Time for another one!

We knew they had a reunion when we were heading that way and we were happy to dawdle a few days, especially since the Royals were in the World Series and we wanted to watch every one of those extra innings.We found one of those small, long-termer parks in Woodward, Oklahoma where we selected a site with a clear satellite shot and conveniently across from an underground tornado shelter. 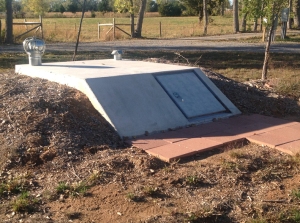 Welcome to Oklahoma! We settled in to watch the game. Royals win! Now we know we have to watch the next game; that could be the end of it. 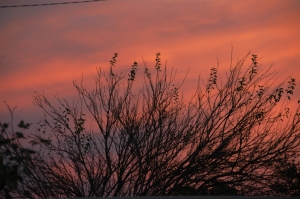 Figuring that Janelle and Bill might like a night off before entertaining again, we planned to watch Game 5 in Norman. We pulled into the fairgrounds in Norman and settled in. Again, in extra innings, Royals win! They took the crown! Wow.

We got together the next morning and headed to lunch straightaway at the Midway Cafe in Norman. Great sandwiches and potato salad. And soup. Old grocery store atmosphere, right on the corner in an otherwise residential neighborhood. Active  scuba divers, they swim three times a week and eat there often afterward.

That afternoon we planned our tie dying adventure for the next day. We got some 100% cotton blankets when Jim was in the hospital for his wrist surgery and even at a stressful time like that, we knew they would make great tie dye. We got three, one for the Okies. I also had a large bag of linens, napkins and stuff to dye that Janelle had stored since we sold our house and stuff. Some of the napkins were yellowed and stained, perfect candidates for tie dye. And the ironed napkins? From my Aunt Muriel who probably ironed them more than 50 years ago. Just waiting for a new lease on life. 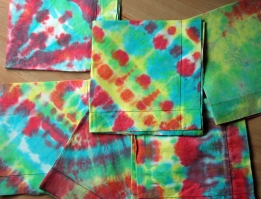 BEFORE and AFTER: A set of 12 napkins and a large tablecloth. The tablecloth is for another time.

Before stuff can be dyed it has to be washed since it needs to be wet for folding. It’s an involved, multi-step process. 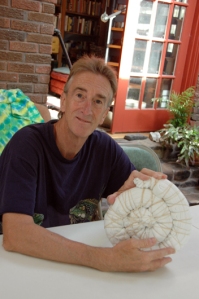 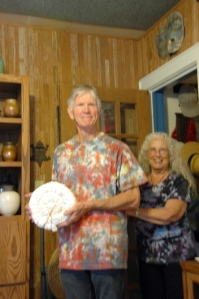 Bill and Jim folded the big stuff, the three blankets and other odd shirts. Bill has a very precise and recognizable style of folding and dying. It was a good choice to have he and Jim work together. Janelle and I tackled the small stuff; napkins, handkerchiefs and a few shirts. We folded and talked until lunch which was a delicious homemade gumbo and cornbread. Time to dye!

This is everything to be dyed. It may not look like much, but it all those groups of fabric have to be dyed, the dye set with soda ash, then rubber bands removed and the dye rinsed out in the sink before another wash in the machine. Whew! 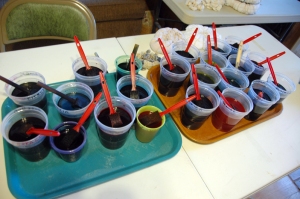 Some of the results. My new favorite shirt:

One of Muriel’s hankies. Several one-of-a-kind items have special stitching and sewn designs.

We weren’t sure how these placemats would turn out; they are damask and the dye took differently on each side. One of the things I love about tie dye is that you never know what the end result is going to look like until you see it. Like watching the image come up on a darkroom print. 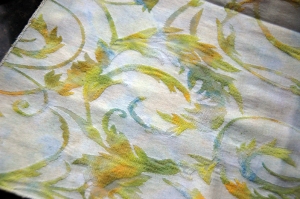 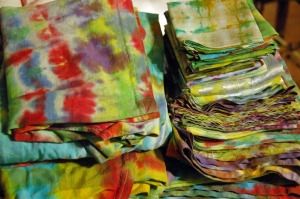 After the tie dying and Toddy Time, Janelle showed us the quilt she made over the winter that Bill described perfectly; “This is our life.” An amazing composition of their years together, including adventures in Alaska, where they lived for about ten years. It is indescribably beautiful and so meaningful. I have seen a lot of T-shirt quilts but none so lovingly detailed as this. 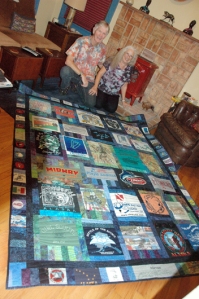 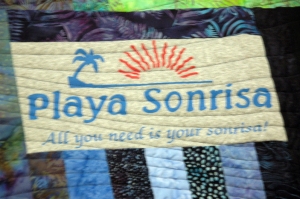 Playa Sonrisa is where we met these guys. And other good friends too.

That was a full day! We were all exhausted, especially Janelle, who did the washing, a bunch of folding, dye mixing and overall supervision. Not to mention cooking delicious meals along the way. We had lots of dye left over so we had another mini-session the next day after a Mexican lunch. Lots of hostess gifts to share on the road. Then an impromptu happy hour with their good friends, John and Carol, who we really enjoyed meeting and getting to know. John is an Okie who has also lived in Alaska, like Bill and Janelle. He is a contractor and an enthusiastic fossil hunter and paleontologist. He has a whole building filled with interesting stuff.  Carol is a New Yorker who moved from Brooklyn Heights 10 years ago to marry John and make their home in the countryside outside Norman. They were interested in seeing the bus and we made plans for them to come out in the morning before we took off.

The next morning was Oklahoma Ominous. The weather called for severe thunderstorms, hail and tornadoes. Fun! Bill and Janelle showed up to say goodbye too just as John and Carol arrived. After the bus tour (which doesn’t take long…) it started pouring down rain and hailing. The tornado warnings were still in effect and we figured we best stay another night. It is nice not to have obligations or reservations. We broke out a bottle of wine and continued our conversation. But not before we took some group selfies. 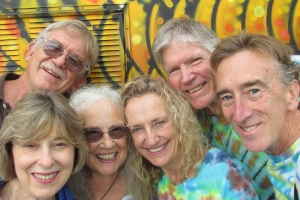 The weather broke and  Carol suggested that we all come to their house for lunch. Everybody heartily agreed and we took off for their place in the country for a fabulous impromptu meal of sandwiches, salad, dessert, and of course, wine. We enjoyed their company immensely and are thrilled to count them as new friends.

We had a fine lunch. They showed us their house and John’s shop. He has a good garage where he works on all his many projects. 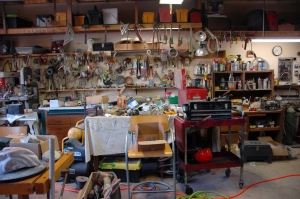 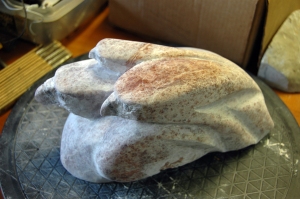 Some of his paleontological finds: 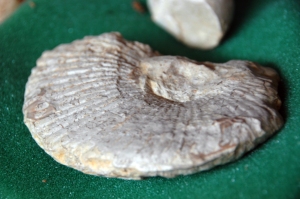 I gave Carol one of the tie dyed hankies we had done and she just sent me a note that she figured out what to do with it. I guess she won’t be blowing her nose on it! Looks good in her crystal vase though and optimally displayed. Clever girl! 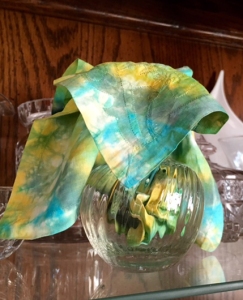 The view from the back of John’s shop where he is building a deck. The light was beautiful. 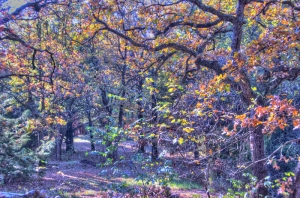 What a fun time we had! We always love seeing the Okies and we had the bonus of meeting our new friends John and Carol. We are looking forward to many more get-togethers in the future. I know I say this a lot, but we really love you guys!

Now THAT was a really good stop! 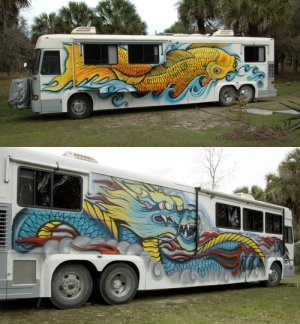 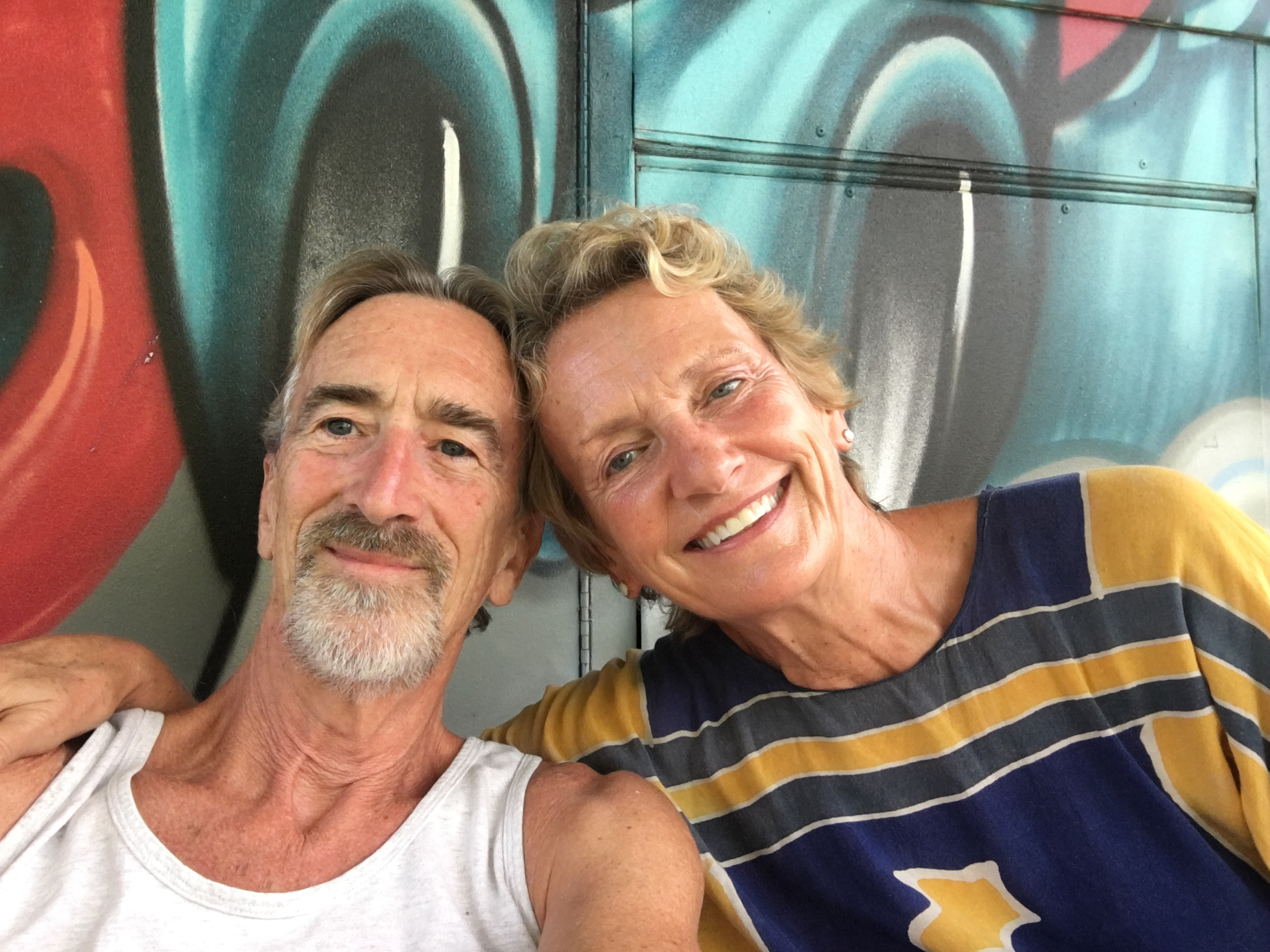 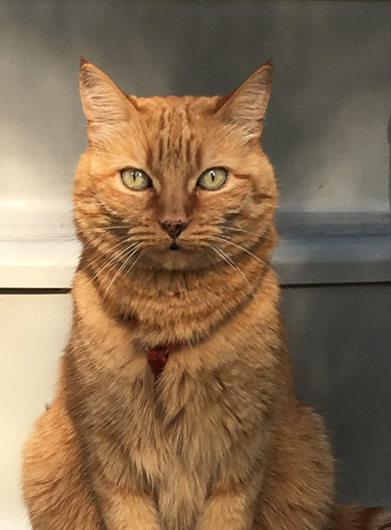 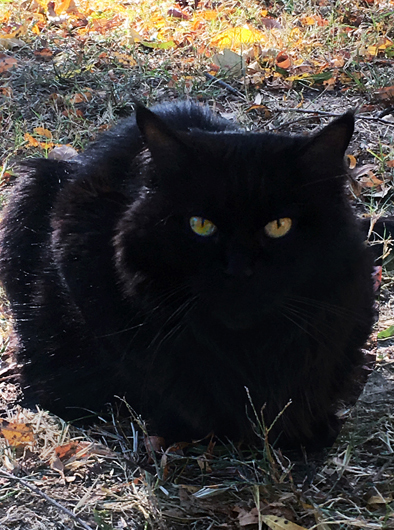 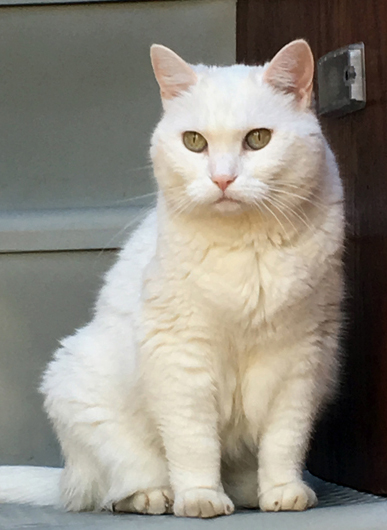 See The Mighty Bus From the Beginning